I wanted to get one more courthouse picture before the end of the year, and today was the last Sunday to get that done. Looked at my map and Bryan was the most logical destination for a Sunday ride. I travel through (or around) Bryan often when going between Coldspring and Temple, but never go downtown where the courthouse is located. Thinking back I could not remember ever seeing the courthouse. I was in for a bit of a disappointment.

The ride to Bryan can be just about as boring as any route I’ve ridden. Make two right turns, two left turns and the road goes through Huntsville to Bryan. All of 95 miles. Well, I am familiar enough with the area to know there is a couple of other ways to get to Bryan. It’s a bit farther, but it’s Sunday, the sun is shinning and it’s not too cold (hovering right around 60 F all day). The part that was not fun was the wind, and if you’ve followed any of my travel reports, you know I don’t like fighting the wind. So, the flags I saw along the way were all starched standing straight out from the wind coming straight out of the north. Decided to ride the KLR. The ol’ Girl has not been on a picture ride for quite some time. Taking the KLR turned out to be a good decision when I came upon the “road closed” signs on the OSR.

The route I chose was to go to Huntsville and take FM 247 to Midway. From Midway take OSR (Old San Antonio Road) to Normangee, then Texas 39 to North Zulch, turn right on Texas 21 to Bryan, go downtown on William J Bryan St. and the courthouse is on your left. But for the life of me I could not find the courthouse. Rode right past it twice. First, it does not look like a TEXAS Courthouse. It looks like a modern office building. Secondly, the front is on the opposite side from WJ Bryan Street. So, I get the bike in position, get the camera out, click, one a little closer click. Now to find the marque; found nothing about the courthouse, mostly stuff about William Bryan and his contributions finding Texas A&M. This was the only marque I wanted to take a picture of, an NoClick, the camera battery was dead.

Over all it was a nice adventure, and a good way to spend a Sunday.

Here’s the only picture I got. 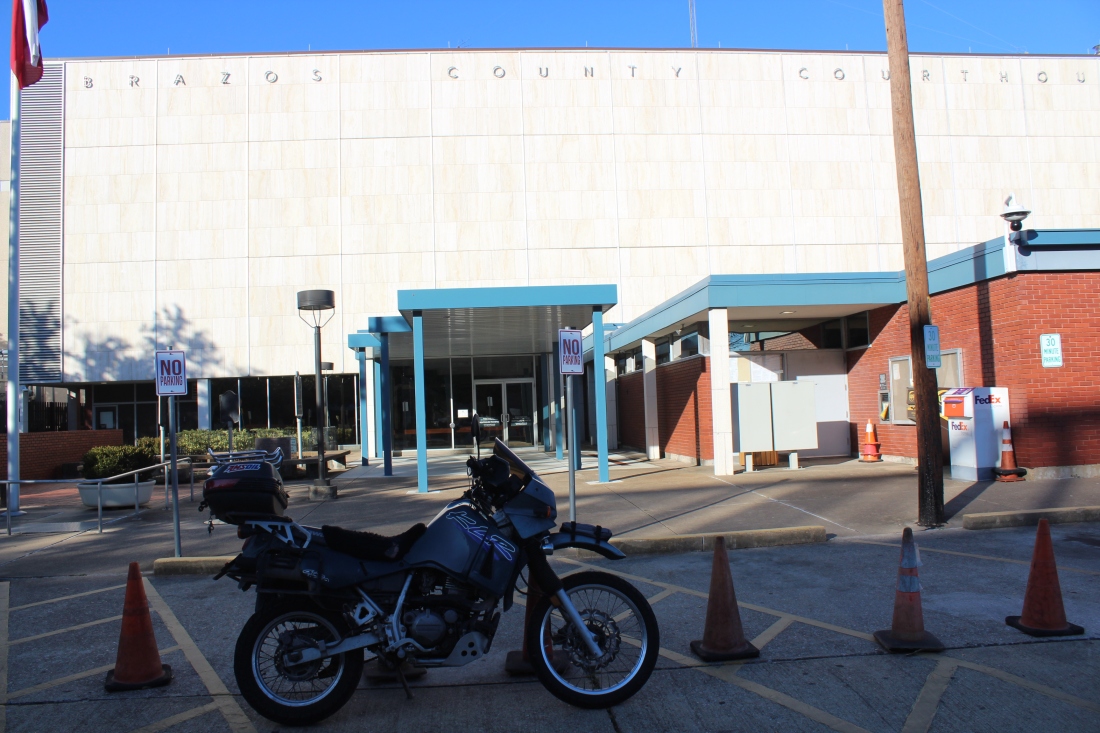 Hope ya’ll have a Happy and Prosperous New Year. More picture to come in 2020.

I consider myself an Adventure Motorcycle Traveler with over 50 years riding experience. Been to all four corners of North America, and always thinking about my next ride / adventure. I have a stable full of motorcycles and check the adds and forums regularly for another one; however, limited space keeps me in check, so I only have five right now. Just started a new adventure by buying a Sidecar rig. Man, (and ladies) this is totally different. So different I thought it needed a blog all to itself. Might have to change my handle from Lowrider Bud to Sidecar Bud. I'll let ya'll know how it goes. Later, Bud... View all posts by Bud Campbell

Links to other pages …