The title doesn’t tell much, and that’s because I covered a bunch of courthouses today.  I’m on my way to Alaska on my Africa Twin.  My first stop is at my sister Patt’s in Edmond, Oklahoma.  I decided if I went there on the back roads I could get some courthouse pictures along the way.  I went up Texas Hwy 19 to Palestine, Athens, Canton, and Emory, and got the courthouses for Anderson, Henderson, Van Zandt, and Rains Counties. 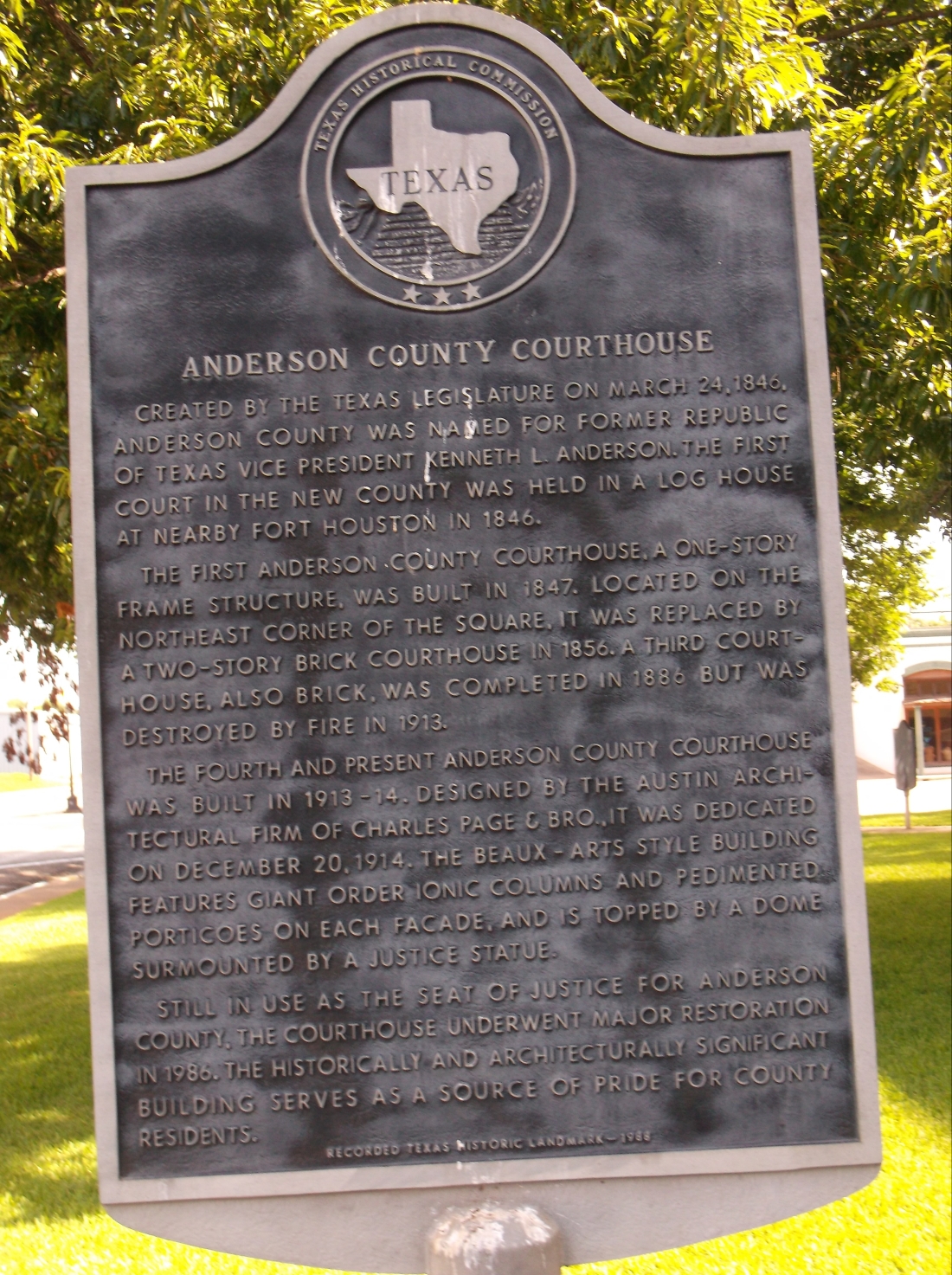 From Palestine, I continued up Texas 19 to Athens.  Here’s the Henderson County Courthouse.

All the sides of this courthouse look the same.  This is a real nice example of a fine Texas Courthouse, and the AT looks like a pack mule.  It’s almost as comfortable. 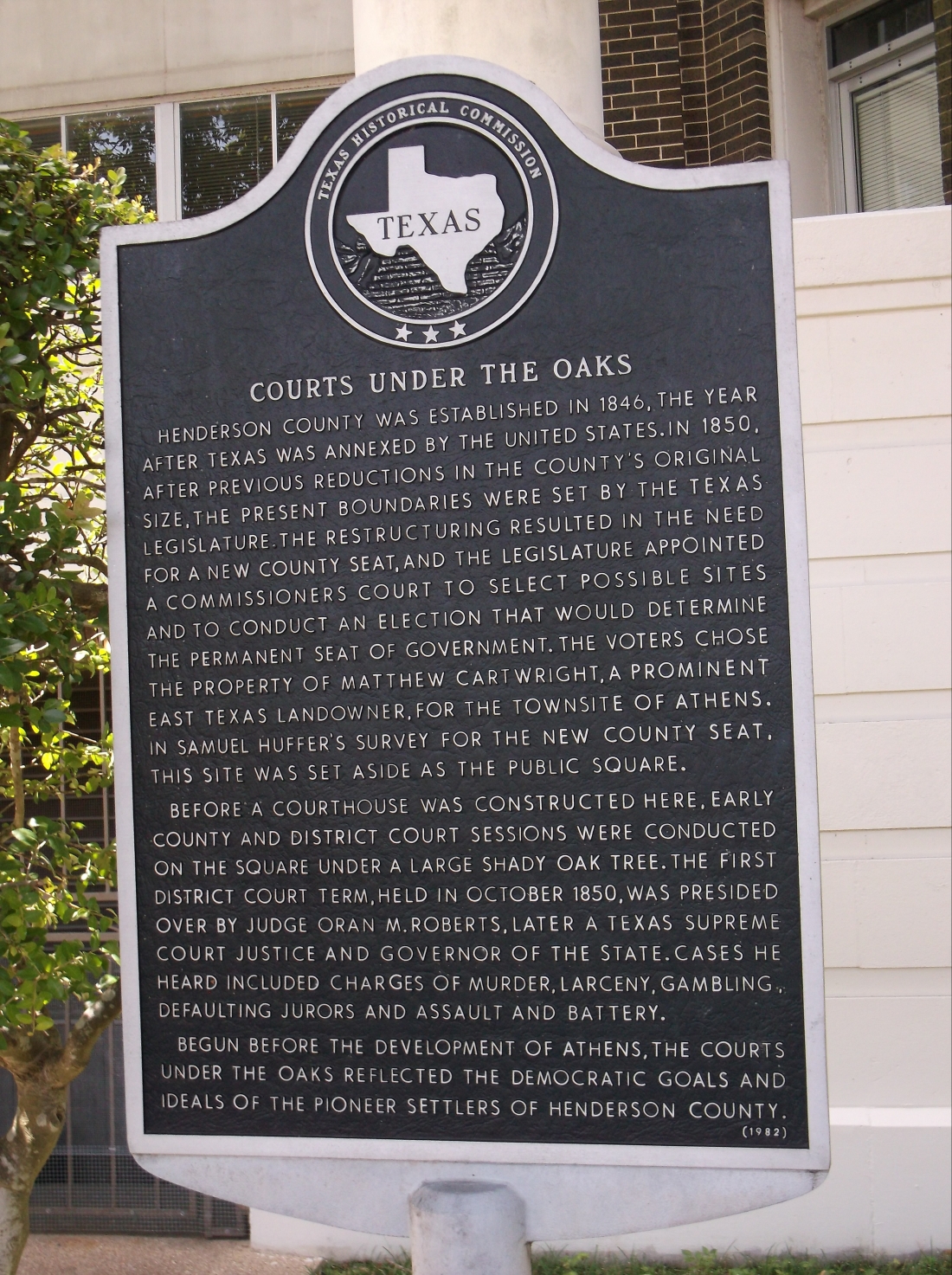 Under the Oak Tree – sounds pretty convenient – bring the accused prisoner to the bench, find them guilty, and hang them right there.  Talk about speed to trial, et al.

Onward to Canton and the Van Zandt County Courthouse.  I’ve been to Canton many times.  When your married to an antique collector/dealer you’re going to go to Canton to 1st Monday, more than once.  In the times I’ve been there I never paid much attention to the courthouse.  I also thought it would be impossible to  get a good picture with all the weekend traffic, but it wasn’t.  In fact, a truck driver saw that I was trying to get into position to take the picture, and he stopped in the middle of the block so I could.

Not very interesting history, but a very cool courthouse.

Not far up the road from Canton, is the town of Emory and the Rains County Courthouse.

Many of the counties built multiple courthouses near the turn of the century.  Many had fires for some strange reason.  I like the fact that they used a local brick company to build this one.  Of course, transporting enough bricks to build a courthouse in 1907 was more complicated than building a brick factory 3 miles away.  Just my thoughts.

I traveled north on 19 to Sulfur Springs, hoping to get one more courthouse.  When I got there I rode right past what I believed to be the Hopkins County Courthouse, but there was no place to park (even my motorcycle) and no access for a good picture.  Something was going on and the downtown area was filled with weekenders from the DFW Metroplex.  Maybe next time when I’m just passing through.

Next stop was Oklahoma, and then onward to Alaska.  Check it out Bud’s 2019 Trip to Alaska

I consider myself an Adventure Motorcycle Traveler with over 50 years riding experience. Been to all four corners of North America, and always thinking about my next ride / adventure. I have a stable full of motorcycles and check the adds and forums regularly for another one; however, limited space keeps me in check, so I only have five right now. Just started a new adventure by buying a Sidecar rig. Man, (and ladies) this is totally different. So different I thought it needed a blog all to itself. Might have to change my handle from Lowrider Bud to Sidecar Bud. I'll let ya'll know how it goes. Later, Bud... View all posts by Bud Campbell

Links to other pages …